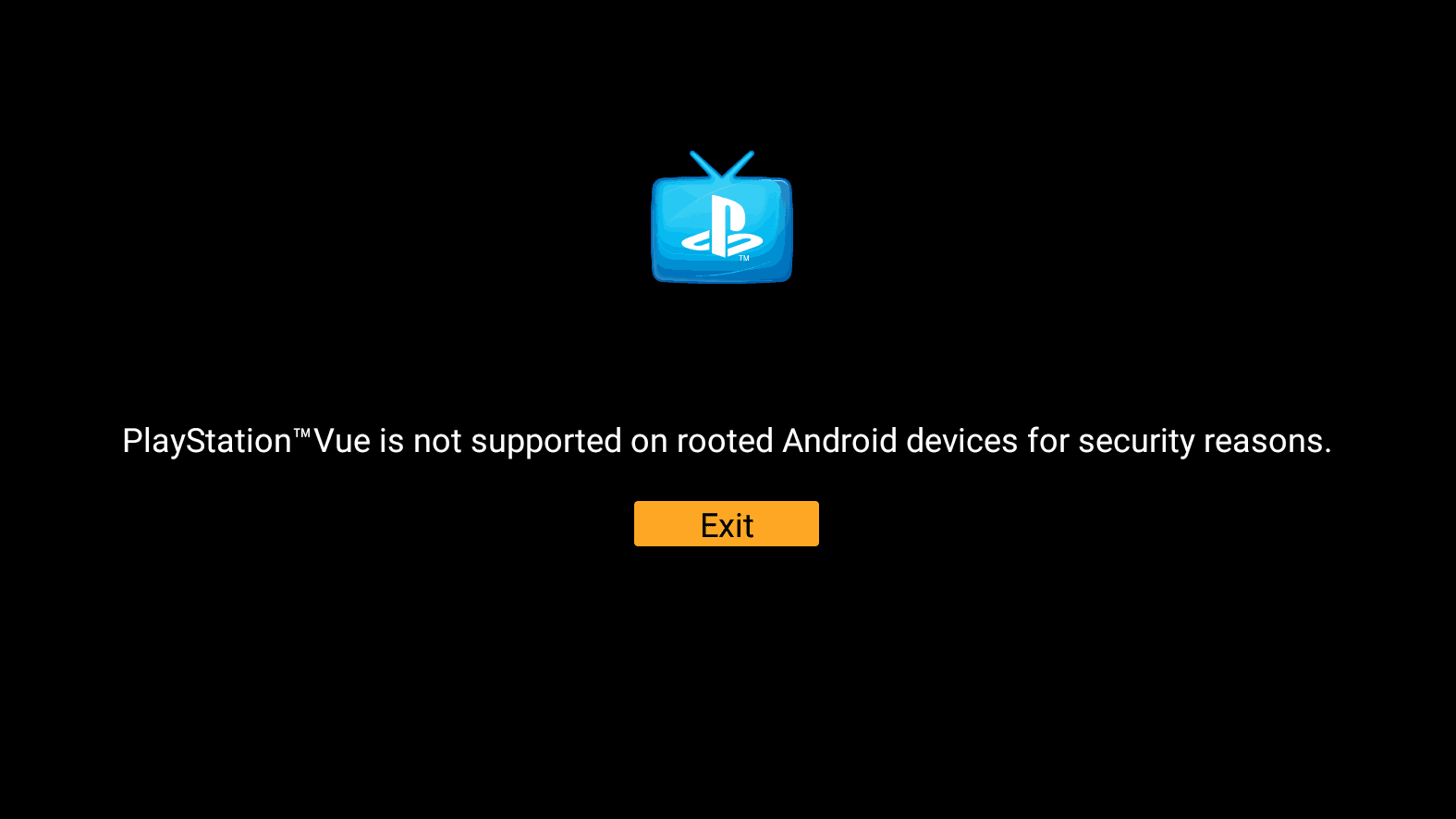 Our PS Vue review concluded that even though it is slightly more expensive than other OTT services such as Sling TV, the price premium was worth it. For me personally, the availability of Kodi PlayStation Vue addon made it even more attractive. [Read: Guide: How to install PlayStation Vue on Kodi: Watch PS Vue on Kodi]

The problem, however, is the not the Kodi PS Vue addon but its the PS Vue app on rooted android devices. It does not work and throws the following error.

So if you are like me and have a rooted Fire TV or Android phone, you may think you are out of luck. Not really.

How to Use Playstation Vue with Root

One solution is to use PS Vue through the PS Vue Kodi addon. Having a rooted device has no effect on how PS Vue runs through the Kodi addon (at least for now). But what if you want the actual PS Vue android app to work on rooted android device? After all, the android app does have a nicer interface with some great features compared to the Kodi addon. Hiding root is the only way to make PS Vue on rooted Fire TV or Android device work. On a rooted android device with the SuperSU app, this is as easy as disabling Super User from the SuperSU or SuperUser app settings as shown below, and rebooting your phone. Note that you will not have root permissions until you re-enable it in the app settings and reboot.

On rooted Fire TV, this is quite easy and takes less than 5 min if you follow the instructions below. Plus, root is hidden but still available to use when needed. So let's jump in.

If you haven't yet configured adbLink for Fire TV please do so before proceeding. adbLinks makes performing several mods and hacks on the Fire TV a breeze, including sideloading apps. It works on Windows, Mac, and Linux.

Establish an ADB connection to your Fire TV through adbLink app. Once connected, click on "ADB Shell" as shown in the screenshot below.

2. Elevate your level to root (su)

After issuing the su command in ADB Shell, you should see a prompt appear on Fire TV asking you to grant the requested administrative privileges. Use your Fire TV remote or Mouse/Keyboard to navigate and click "GRANT". [Read: 5 Best IR remote controls for Kodi boxes – Fire TV, Android TV, Shield TV]

After you get root privileges the real work begins: hiding root from Fire TV so PS Vue can work. First, you need to remount the /system folder with read-write permissions so you can make changes. For this, use the following command:

Note that ADB Shell will repeat the commands you typed upon successfully executing them. The output should look like the picture below.

Next, navigate to /system/xbin folder and make sure you have su listed.

If you see su in the output list you are good to change its permission and rename it using the following commands:

The ADB Shell for these series of commands should look like what is shown in the screenshot above.

The final step is to navigate, find your root app, and rename it. First, find the name of your super user app using the following commands:

It should be SuperSU or Superuser. As it can been seen in the output below, in my case it was SuperSU. Note that you may also see .apk file extension in some cases. If so, make sure to use the full filenames (including extension) in the commands below.

Next rename, super user app using the command below. If your root app is Superuser, replace SuperSU with Superuser. Include file extension .apk if needed in your case.

The whole sequence of steps is shown in the screenshot above. Finally, reboot your fire TV using the reboot command.

Now that we have hidden root from Fire TV / Android device, it is time to reopen the PS Vue app and test.

It should go straight through and show you the sign-in screen. While this guide looks like a long one, the process should take less than 5 minutes. Rooting a Fire TV has not been as beneficial as rooting an android device. It is mainly to prepare for the doomsday scenario: Amazon blocking kodi. However, we have not seen any signs of that. In fact, recent Fire OS updates have only made launching sideloaded apps like Kodi easier. But if you already rooted your device and have PlayStation Vue subscription then I hope this guide helped you make PS Vue work on Rooted Fire TV.