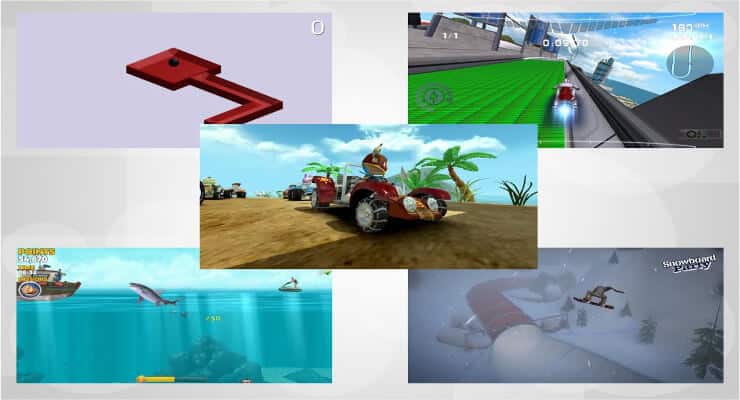 The majority of the Amazon Fire TV games in 2017 listed below are free to download and play with just a couple that are chargeable. Please read the detail on screen prior to downloading. Some offer in-game purchases so ensure that you read all of the information that is put in front of you whilst playing your games. Most games listed will work with the standard Amazon remote whilst other require and Amazon Fire TV gamepad. I have specified the available controller options for each game featured. At the end of the post, we will look at some of the best Amazon Fire TV stick games and those that go well with the portable version of Fire TV. [Read: 10 Best Amazon Fire TV apps for media streamers]

If you are a fan of the classic "Mario Kart," then "Beach Buggy Racing" is one of the Amazon Fire TV games in 2017 you should try out. It has a similar racing style staged on various off-road beach courses. Choose from a selection of buggy types and vehicle models and fully customize your kart colors. Each driver has unique driver abilities and can do different things on the track. The courses are all different and the tracks look great! Compete with your friends in up to 4 player split screen mode. It is one of those games that is more fun the better you get. Works with remote or Amazon Fire TV gamepad. [Read: Install Kodi on Amazon Fire TV using adbLink (Method 1)]

Next in our Best Amazon Fire TV Games 2017 list is "Hungry Shark Evolution." It is like a pimped up version of the Sega Genesis classic "Ecco the Dolphin." The idea is simple: Survive as long as possible by eating everything that gets in your way! The game features a range of different sharks to control and many different weapons and attack modes to use. The game has far better visuals than the Genesis classic ever had and the game play is far more explosive. This is the type of game you can jump on and enjoy when you only have a small amount of time to kill. Works with either remote or Amazon Fire TV gamepad. [Read: Configure adbLink for Amazon Fire TV and Stick (pka adbFire)]

"Impulse GP" is a futuristic racing game where your riders race around the track on hoverbikes. The game is fast-paced with many power-ups along the courses. There are different modes to use including Quick Race, Pro Race, and Championship. Enter the garage to view your available bikes and customize their features. "Impulse GP" is free to play but with in-game purchases available to enhance your experience. Works with remote or Fire TV gamepad. [Read: Install SPMC on Amazon Fire TV using only AFTV device]

If platform games are your thing then one of the best Amazon Fire TV games 2017 is "Sonic The Hedgehog 4 Episode 1". This is a game in the Sonic series designed for use on multiple devices. The gameplay is very much the same as the classics with the same attack modes and power-ups available. It does, however, feature far superior graphics than the originals on the Sega Genesis. Requires the Amazon Fire TV gamepad. [Read: Install FireStarter on Amazon Fire TV: alternative launcher]

And now for the first puzzle game in our best Amazon Fire TV games 2017 list. Tetris is a remake of the Nintendo classic for Amazon and Google devices. The gameplay is exactly the same as the original. As the bricks fall from the top of the screen you must rotate them and line them up in terms of colour before they hit the bottom of the screen. "Tetris" is one of the most popular puzzle games of all time and the version available on Amazon is certainly a great addition. It features the same classic theme tune and there are modes that are designed to look like the very first Gameboy version. Works with either remote or Amazon Fire TV gamepad. [Read: 5 Must try Kodi skins for Amazon Fire TV]

Interested in card games? "Texas Hold'em" is one of the most popular forms of poker out there and is the second of our best Amazon Fire TV Stick games. In this game, you get an authentic casino style game giving you the opportunity to practice and brush up on your poker skills. The game features seven different tables and you will face lots of different player types along the way. If you are into card games and particularly poker then "Texas Hold'em" could be one of the best Amazon Fire TV Stick games for you. Works with either remote or Amazon Fire TV gamepad. [Read: Create Kodi shortcut on Amazon Fire TV home screen]

"Infiniball (TV Edition)" is a game that is simple yet very addictive. If you remember the classic board game Marble Madness it is along the same lines. Start the marble rolling and then control its direction to navigate around a maze. The further you get around a maze the higher score you will achieve. It is one of those games that really challenges you to beat previously achieved high scores. The game features multiple mazes to test yourself against. This is one of the most addictive Amazon Fire TV games in 2017. Works with remote or Amazon Fire TV gamepad. [Read: Raspberry Pi vs Amazon Fire TV for Kodi media center]

There are many games to choose from in our Best Amazon Fire TV Games 2017 list. These are all from different gaming genres and offer different things. Most games are free to play so install a few and get playing. As stated earlier some titles offer in-game purchase so make sure that you read the onscreen information. The Amazon Fire TV games list is growing and the number of gaming titles is increasing by the day!

Your turn: What Amazon Fire TV games do you recommend?