I want to make the scope of this comparison very clear. If you are in the market for a Kodi media center box and are looking for a sub $100 solution then use this Amazon Fire TV vs Raspberry Pi comparison to make an informed decision. There are a lot of things that a RPi can do that AFTV cannot do and vice versa. Remember that Amazon FireTV runs Android and that's it (it cannot run other OSes). So if you are looking for a Kodi media center box, then here are 6 reasons why I think you should consider Amazon Fire TV over Raspberry Pi.

RPi vs AFTV, is very limited in hardware. Amazon Fire TV boasts much stronger specs than Raspberry Pi and is specifically designed to support HD video streaming. Below are some key comparisons.

There is absolutely no doubt that Amazon Fire TV has the better hardware in almost every category and is more than capable handling HD playback. The only drawback is, Raspberry Pi vs Amazon Fire TV has 4 USB ports. Unless you plan on connecting two USB devices to the Amazon FTV, this is not a limitation. It costs about $60 to build a Raspberry Pi B+ media center with accessories. Even at the full price $99 I think Amazon FireTV is a much better deal and value for what you get. 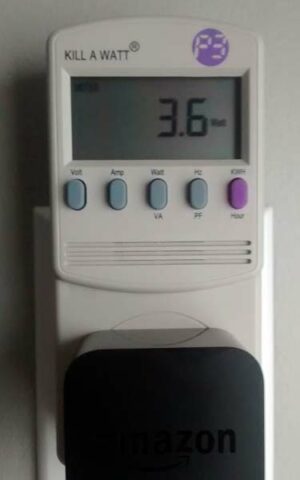 Raspberry Pi consumes only about 3 Watts of power. But the biggest draw back for me was, I was using my TV's USB port to power up my RPi. While turning off the TV powered of my Pi, many times my remote was not recognized. So I had to manually pull the USB IR receiver out and plug it back in. If the Raspberry Pi is powered by a dedicated power adapter, it can be left On 24x7. But I prefer to not leave it on. [Read: Low-power budget HTPC build 2014 for a HTPC NAS Combo]

Amazon Fire TV on the other hand automatically sleeps after 30 min of non-activity and automatically turns on when the HDMI becomes active or a remote button is pressed. Except for occasional spikes to 5 Watts, it mostly hovered between 2.5 to 3.5 Watts, even during HD video streaming through Wifi. What the Amazon Fire TV is capable of doing at this level of power consumption is amazing if you ask me. And personally, I would trade in my Raspberry Pi for the the Amazon Fire TV for the much better Kodi experience.

I tested both XBMC 13.2 and Kodi 14.0 on the Fire TV and was pleasantly surprised by the speed. It is as fast and fluid as, if not better than, my Mini HTPC. With Amber Skin, which is a great Kodi skin, my Amazon Fire TV Kodi box is zooming and all thumbnails show up in a blink. Even Raspberry Pi overclocked to 1000 MHz could not match Fire TV's speed. Playing over the network was flawless due to the 5 GHz wifi capability, which has less interference. [Read: 10 Tweaks to improve XBMC performance on Raspberry Pi]

Raspberry Pi vs Amazon Fire TV, only has Ethernet support and no built-in Wifi support. Amazon Fire TV boasts dual band (2.4 GHz and 5 GHz) MIMO wifi. I paired it with the 5 GHz network from my ASUS RT-AC68U router and was able to stream HD videos without any hiccup. No Kodi buffering or stuttering issues. [Read: Strategies to fix XBMC buffering issues on Raspberry Pi]

While you can add Wifi capability to Raspberry Pi using these Wifi adapters, it takes up a USB port and in my experience 5 GHz Wifi is flaky on Linux at this point. I used to use the TP-Link powerline adapters with my Raspberry Pi for reliable network streaming. Amazon Fire TV versus Raspberry Pi has better network streaming performance wirelessly (a big WAF :-p).

Yes, you can install these best Kodi addons and get several streaming services on your Raspberry Pi Kodi box. But in my opinion it does not come close to the streaming options available on the Amazon Fire TV. Amazon Prime instant video on Kodi is very difficult to accomplish, if at all possible (because Amazon keeps changing/improving their structure). On the Amazon Fire TV you have tons of streaming options, and will make Amazon Prime subscribers happy by providing easy access to Prime Instant Video.

Even if you do not have Amazon Prime, Fire TV still has several other streaming options and also makes a great standalone Kodi media player. [Recommended: Download my OpenELEC Raspberry Pi Book for FREE]

Let us face it, Raspberry Pi is a hobby board. It is not designed for aesthetics. Its ports are not well organized and is all over the place. Even if you put a case on Raspberry Pi it will have wires sticking out on all different directions. Amazon FTV vs Raspberry Pi, is compact and very well designed. It meshes very well with most electronic components and well organized. I only have 2 wires sticking out of the back (power and HDMI). The WAF of Raspberry Pi vs Amazon Fire TV is way less in my opinion. [Read: How to Listen to Google Music on XBMC?]

While the above are some major advantages of Amazon Fire TV over Raspberry Pi, there are other minor potential advantages as well. The the $5 USB IR Remote works flawlessly on Amazon Fire TV. It not only controls playback on Kodi, it also controls Amazon Fire TV. In addition, you can use any Logitech Harmony universal remote, use my remote configuration guide, and practically control every part of Kodi. Most people think that the only way to remote control Amazon Fire TV is to buy a higher end Harmony remotes / hubs. NO - just use this plug and play USB IR remote and you are good to use any Harmony or equivalent universal remote. This is a big Pro for me. So in conclusion, if you are looking for a fast and responsive Kodi box then my recommendation is to go for the Amazon Fire TV. Either way I hope this Raspberry Pi vs Amazon Fire TV comparison helps you out.