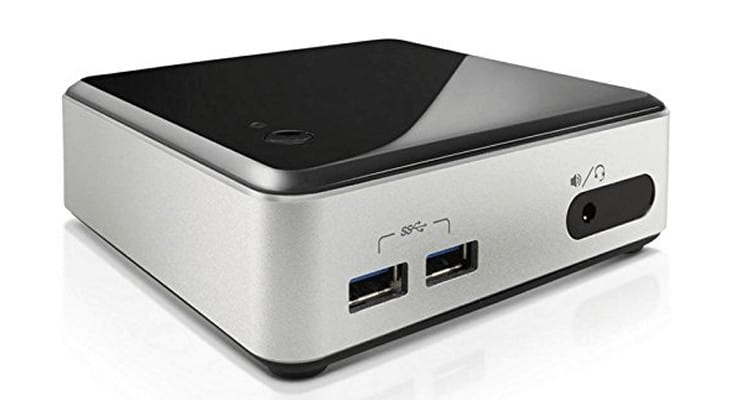 The INTEL devices identified as NUC, which stands for Next Unit of Computing, are simple, bare bone computers with some key features that make them an excellent alternative to build any application in which a small computer can come in handy. They can be enhanced with parts and peripherals that bring their performance up-to-par with the best of desktop computers, and they are especially useful if you do not want a big computer case around, for your intended application. [Read: Low-power budget HTPC build 2014 for a HTPC NAS Combo]

Now, the ideal situation in which you would use one of these mini computers, perhaps would be one in which you don’t want a giant computer case around, you need low power consumption and you need great computing power to, say, play video. What would such an application be?

You’re right! These devices are great to set up a mini computer HTPC or even Media Centers. With the right configuration and a bit of patience, you can transform them into anything you want besides that. Today we will delve a little into what makes these devices so powerful, and by the end of this article, we hope you can be able to make an informed decision about whether to get one or not. For the analysis, we focused on one of these mini computers, the Intel NUC D54250WYKH1, an Intel 4th Gen NUC with Intel HD Graphics 5000 already integrated. The price tag on the 5th Gen devices is a bit too steep, so we focus on this one; however, it is only logical that you would find even better specs in the next generation devices. [Read: A budget HTPC-NAS Combo with an old PC and OpenELEC]

Anyways, without further ado, here are some key aspects of the Intel NUC we analyzed:

Let’s be clear from the start: these devices are tiny. It is evident by just looking at them, that their form factor is orders of magnitude lower than that of the average desktop computer, and therefore, it would be logical to expect their power consumption would be lower as well. This is the case for the INTEL NUC D54250WYKH1, which gets its power from a 19V 65W power adapter, and makes efficient use of every bit of electricity it gets, providing great functionality, despite its size limitations and the low power it uses to run. It is a sample of the amazing power of mini computers nowadays. [Read: VOYO mini PC could be a compact and silent media PC]

If you tried to use a normal desktop computer for your HTPC, you would quickly find out that it is, perhaps, not the best choice. Especially when you want to watch a movie at the quietest time in the night, but your viewing is noisily lulled by the fan noise. Now, this INTEL mini computer has a fan (only on the version that can accommodate a HDD), but it would be best described as a silent, almost inaudible and even tactile whir. This is a critical aspect of a device such as this one, because you want to be able to focus your attention in the content you’re watching, and not in the noise the fan makes. [Read: 20 Best Kodi addons in 2015 to help you cut the cord]

You want to set up a HTPC? Check. You want to configure a Media Server? Check. You want to build a decent casual-gaming machine? Do it. You can’t decide and perhaps want to build all three, and also have a mail server? Who’s stopping you? This mini computer can be used in a myriad of ways, and although its size, its Intel HD 5000 graphics and its low levels of noise make it a great choice for an HTPC, it also is capable of performing in other areas with ease.

The downside of mini computers is, perhaps, that you need to attach peripherals to them, and buy other things like storage or memory separately. This can be trouble if the mini computer does not have enough ways to be connected with the outside world. Luckily this is not the case of the Intel Haswell NUC D54250WYKH1. This device features four USB 3.0 ports, plus two more USB 2.0 ports via internal header, as well as an HDMI port and Ethernet connectivity, as well as an infrared port. As if it wasn’t enough, the Wi-Fi antennae come integrated into the chassis, though you will still have to buy the compatible Wi-Fi card separately. All of these ways to connect, simply translate in peripherals you can add, and more features you can enjoy on your build, later on.

A mini computer HTPC for a fair price

Mini computers are not exactly cheap. When a company like Intel produces such a mini computer, with an integrated Core i5 processor on it, you should start preparing your pockets to cry. However, as we briefly reviewed this device, we noticed that other mini computers (from the 5th generation, mostly) had an even steeper price tag on them, and this device in particular had what seemed to be a fairer one. [Read: Zotac ZBOX-BI320-U could be a budget HTPC NAS Combo]

To sum it up, if you are casual and lighthearted about building a HTPC mini PC or a Media Center, or if you just want basic functionality, then choosing this device would be an excessive investment; however, if your expectations are higher and you want to build a machine capable of many things, while utilizing space and power efficiently on your living room or any other area on your house, then this mini computer is just right for that purpose. There are cheaper alternatives, like choosing a similar model, but with an i3 processor instead. It all ultimately depends on what you want to do.