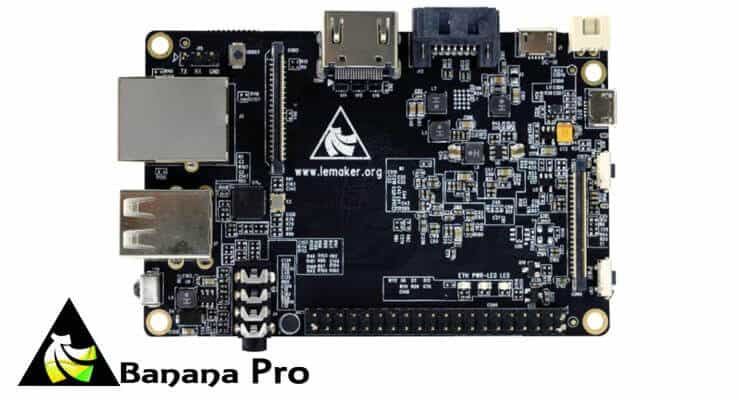 Raspberry Pi has been the hallmark of single board credit card sized computers for a few years now. But more options have started arrive in the recent times. Previously, we presented few Raspberry Pi alternatives and then some more. Among the them, Banana Pi / Pro is a notable one. A single board computer, with low power consumption and as small as a credit card, the Banana Pro is the new device from LeMaker. It has some very interesting features which make a Banana Pi HTPC or Home Server a good alternative to consider. [Read: 5 Most common NAS or Home Server uses]

With Banana Pro price at about $55, it seems to be a great value for the money. The following are Banana Pro computer's specs:

The new Raspberry Pi 2.0 costs $35. Banana Pi Pro compared to Raspberry Pi 2.0, lacks the quad-core processor but does have a gigabit port, thus making it a better for home or media server applications. [Read: Low-power budget HTPC build 2015 for a HTPC NAS Combo]

The Banana Pi Pro comes with a WiFi antenna, which connects to the board, to provide WiFi capabilities for its WiFi 802.11 b/g/n Module. It has on-board gigabit Ethernet, a 40-pin header for low-level peripherals, and access to SATA and MicroSD storage. With dimensions as little as 92mm x 60mm, and a weight as low as 45g, the Banana Pro counts with great video capabilities, being able to perform HD H.264 2160p video decoding, as well as decoding in other formats such as MPEG 1/2, MPEG 4, H.263, H.264. The Banana Pro can also encode H.264 high profile [email protected] or [email protected]

What is Banana Pi Pro great for?

Given its amazing specs and its small dimensions, as well as the low power consumption (~3.1 Watts) it boasts, the Banana Pro is a good option for a multimedia projects or an always-on home media server. In particular, because of its video capabilities and its HDMI output, it is well suited for configuring a Home Theater PC. [Read: What is HTPC, aka Home Theater PC, and what is it used for?]

Because of its decent processing power and gigabit Ethernet port, it can function as a budget Home Server, distributing services to other devices inside the household through a home network or the Internet. Of course, as with any single-board computers, such as the Raspberry Pi , the uses are virtually endless and will depend on the resourcefulness and creativity of the user. [Read: All in one HTPC and Internet PVR How-To]

As we already said in this Banana Pro review, the Pro model can also be a good alternative to build a Home Theater PC, with the right media center accessories. It can decode many video formats (but no 4K yet). The Banana Pi computer has enough processing power and decent (but not great) Mali graphics card with low power consumption. Being compatible with many Linux-based operating systems and Android, makes this single-board computer stand out as a great choice, when it comes to building your own Home Theater PC. Many Linux distros such as Lubuntu, Debian, Bananian, Berryboot, OpenSuse, Scratch, Fedora, Gentoo, and Open MediaVault are support. However, support from media center OSes such as OpenELEC, is still lacking. With time support for Banana Pro will only grow.