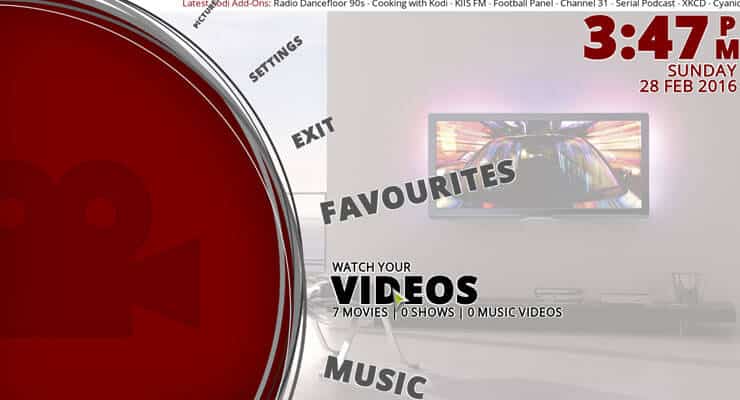 The fact that Kodi is an open-source software opens up the door for all kinds of plugins and complements to make their way into our HTPC devices when they are based on this platform. Regarding skins, we have already seen what a good job the dedicated skin developers are making out there, in particular with Kodi interface plugins such as the ones featured in our 6 best Kodi skins list; or those interface plugins that go very well with Amazon fire TV in the best skins for Amazon Fire TV list. However, almost all of the skins rely on squares or rectangles to draw the interface. Today we take a look at the Kodi Revolve skin; a plugin that will turn your GUI 180 degrees around, by using circle shapes as the main UI element, all the while doing it with dazzling and charming transition effects and quick responsiveness. [Read: 10 Top Kodi skins for tablets and smartphones]

Of course, it's not only circles and bubbles. The Kodi Revolve theme also lets you change the color scheme, out of several presets; each one looking even cooler than the one before. This skin is compatible with all input devices -I was handling it with my computer mouse, and at times with the keyboard-. A wireless HTPC keyboard might be a good option as well. Due to the demanding graphics used by this skin (lots of transitions and effects), it sometimes might become a bit sluggish; it did that for me on a laptop, yet the laptop was updating addons so that might be the culprit. Nevertheless, do not be surprised if this skin lags on your Raspberry Pi. Use these Raspberry Pi skins for Kodi instead if you have such a device. The skin would also be useful and perform well with an Android media player, depending on its hardware.

Kodi Revolve Skin review: turning our view of Kodi around

Menus on circles, rotating while we browse them. Round thumbnails. A landscape visualization that reminds us of the horizon, with cover images moving like if they were on a merry-go-round. If you wanted to know how to change Kodi theme in a radical way, the Kodi Revolve skin might be one of the best options for that. The amount of creativity put into the design of this skin is astonishing, and surely makes it deserve praise. The Kodi Revolve skin is an interesting interface to browse all your media, and it has a good amount of visualizations to go with it. Though it might be a missed opportunity to use CD icons as thumbnails for music. [Read: Guide: How to install Kodi MP3 Streams addon]

If you are interested on knowing how does this skin look and on viewing a sample of the visualizations available with the Revolve skin plugin, then check out the following screenshots:

Kodi Revolve Skin review: do you recommend it?

I would recommend you try this skin and see if you like it. Although the seeking bar cannot be clicked and you need to rely on fast forward and rewind buttons, the OSD menu is really complete and will allow you to alter several aspects of your playback. Install the Kodi Revolve theme today, and accompany it with one of the best Kodi movies addons available, or one of the new ones such as the Kodi Velocity addon. You can customize your Kodi HTPC to your liking with the help of all the free addons available for Kodi!