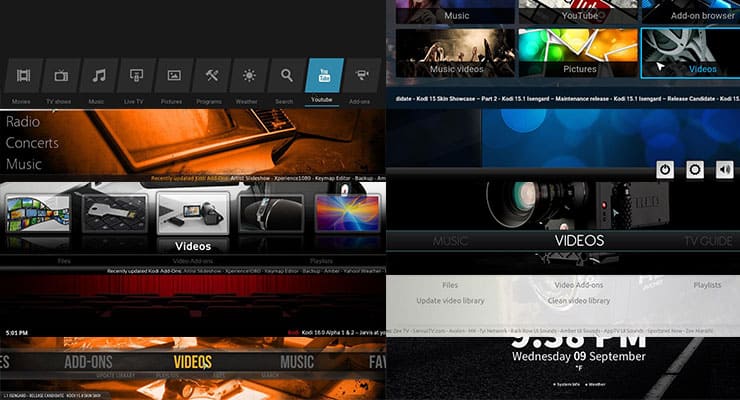 Kodi is a really versatile application, if you consider the fact there's versions for almost every operating system out there, such as XBMC/Kodi for Windows, and more recently, Kodi for Android. However, this versatility can turn into a nightmare when the primary means of controlling your Kodi setup is not a remote with directional arrows or a wireless HTPC keyboard, but instead, a touchscreen. The default Kodi skin, and most of the best Kodi skins out there, are designed to be used with a remote, or even a keyboard and mouse, if you install it on your desktop computer -for some reason- but, what happens if you need a Kodi touchscreen skin for your tablet or even your smartphone? Are you forced to buy a device with a remote controller or even a gamepad to browse your media comfortably? [Read: NVIDIA SHIELD TV: An amazing option for your media center]

Well this is most certainly not the case, since Kodi has an awesome and active developing community designing lots of addons for it. These addons include skins that could only be labeled as Kodi skins for tablets and smartphones, since their primary use is with touchscreens, and they seem to be really good at offering you enhanced comfort when browsing your media with Kodi on your favorite touchscreen device. Want to know what are these skins that will boost your Kodi experience on your latest mobile device? Read on to find out.

You can find this Kodi touchscreen skin on the official XBMC/Kodi addon repository. Beautiful high-resolution images serve as background for the main menu, with the same shape as that of the Confluence skin, this is, a big strip running on the bottom half of the screen, and a smaller strip below it, acting as a sub-menu. Several visualization options such as list, panel, fanart and others, make the menus on Kodi Amber skin customizable on each of their options, with interesting transition effects when moving your cursor above every addon or menu item. [Read: Kodi Amber Skin Review: ribbon Kodi Skin for touchscreens]

This is one of the Kodi skins for tablets which is also included on the Kodi official repository. Back Row Kodi touchscreen skin places you in a virtual cinema, and is in fact developed with that theme in mind. Menus are reel tapes, and backgrounds are curtains and countdowns similar to those of the old movies. When browsing things such as video addons, you will see the logos at a decent size on the screen, ready to be tapped in order to launch the desired addons. We wrote a Kodi Back Row skin review some time ago, and found out that, with this skin plugin, categories are chosen on list menus and items are selected on movie reel menus. Definitely one of the most eye-catching Kodi skins for tablets out there.

A clean and polished Kodi touchscreen skin that allows you to change the color of its reflections. Black Glass Nova skin for Kodi is optimized for touchscreens because the width of individual menu elements is actually pretty close to what you would expect on a touch application. Fluid transitions resize the menus on-the-go, so you have a neat and slick experience whenever you browse your media using this addon. As most Kodi skins for tablets, Black Glass Nova also lets you select from several visualizations, including big panel, list, big list and fanart, so you can have an experience tailored to your taste. This plugin is available from the official Kodi repository as well.

Snappy fast, elegant and clean. These are words that describe the Cirrus Extended Kodi touchscreen skin you can find within the official XBMC/Kodi repository. Several visualizations not available on the previous Kodi skins for tablets are possible with this one, such as several options of the fanart visualization -where the width of the bottom element varies between narrow and wide- and another one called "rightlist". One visualization I liked from this addon was the "music wall" option, where the logos of your addons form a wall where you can just tap your choice easily. [Read: Kodi Cirrus Extended Skin review: elegant interface for Kodi]

This is another of the Kodi skins for tablets you can find within the official Kodi plugin repo. Eminence skin for XBMC is one of the best Kodi skins for tablets, for people who appreciate simplicity and speed. A minimalistic black and grey menu greets you when you start Kodi using this skin, with more options than those found on other addons of the same kind, such as a dedicated YouTube icon and a button for all your addons. When browsing media content, you get a list menu, and there's no possibility to readily change it on the go as with other addons; in this case, this adds to the simplicity of the Kodi Eminence skin, making it one of the top kodi skins for tablets and smartphones. [Read: Guide: How to install YouTube Kodi addon]

If you like simplicity, Maximinimalism Kodi touchscreen skin will quickly become one of your top Kodi skins for tablets. On the main menu, a clock with your local time and the weather (if you have configured it) displays along several rounded and stylized icons, ready to be tapped and let you access their contents. Browsing content, for example, video addons, displays a spread of the logos and icons available, which you can easily visualize and access. A brief comment about the content of the addon or media you will watch displays below its name, to make sure you are always informed of your selection. You can find this addon within the official Kodi repository. [Read:Kodi Maximinimalism Skin Review: a skin to keep it simple]

An eye-catching menu runs on the bottom half of the screen, leaving a wide space open on top for great quality images relative to the features we're selecting at that moment. With a light and dark theme, Nebula Kodi skin is configurable, easy on the eyes and pretty fast as well, which makes it stand out against other Kodi skins for tablets. Several visualization options, such as slim list, list and even icons; which is by far my favorite. With the "icons" visualization, you get your screen covered in square icons with the logos for addons or content you want to watch, putting you just a tap away from your content. In our Kodi Nebula skin review we found out it can also be downloaded from the official Kodi repository.

Vibrant colors set this Kodi touchscreen skin apart from other Kodi skins for tablets, in an interface reminiscent of the default "Confluence" skin, at least on a first impression. The Neon Kodi skin plugin offers a lot of visualizations but the one that caught my eye the most is called "poster" and its counterpart "3D landscape"; for these visualizations, the logos and pictures take on a 3D shape which can be selected with a tap. It's a nice detail that makes this skin very appealing visually and one of my favorite Kodi skins for tablets. The Neon Kodi touchscreen skin can be found within the official Kodi repository. [Read: Kodi Neon Skin review: vibrant colors for your HTPC]

Not only does this skin come in the official Kodi plugin repository, but it also comes pre-installed when you run Kodi for the first time, what makes it stand out in most Kodi skin reviews. Whenever the topic "Kodi skins for tablets and smartphones" comes up, re-Touched skin for XBMC/Kodi pops up as a great option. It is specially designed for touchscreen devices, and you can test it yourself if you take a look at details such as the battery indicator on its top-right corner, or the fact that all buttons seem to be precisely sized to be tapped. Not so much regarding visualizations, but there's a very interesting one that displays content thumbnails and detailed info about the content right alongside it.

Vibrant colors and images are the most attractive features of this Kodi touchscreen skin that comes within the official Kodi plugin repository. Lots of interesting visualizations that can be switched from a side menu which can be brought out with a dedicated button, setting it apart from other skins where simply hovering your finger near the left edge opens the visualization options. The Titan Kodi skin also has a YouTube dedicated menu item on its main screen, which integrates nicely with the other options. When watching content, the skin actually calculates at what time it will end, which is handy for late night viewing.

These skins are compatible with your mobile touchscreen device and add a nice touch -no pun intended- to your Kodi experience. Usually you would run Kodi on a set-top box connected to your TV, such as the Tronfy MXQ Android TV box or the NVIDIA SHIELD TV, however, running Kodi on a tablet might be great for things such as watching movies on your bed or even on a long road trip. The possibilities are endless, and with these beautiful skins, and other skins for Kodi you might find by yourself, your experience can be as beautiful and convenient as you like.