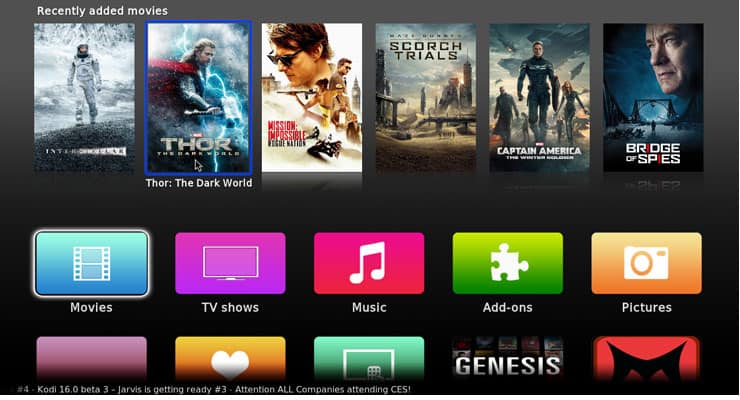 Most skins are designed with the goal to be visually appealing and bringing a good appearance to your Kodi HTPC. The Kodi SiO2 skin is a Kodi theme that looks good, but does not have this as a primary goal. Instead, it focuses on being functional, and minimizing the clicks you have to perform in order to get to your content. We have previously shown you lists for the 6 best skins for Kodi as well as the 10 best skins for your touchscreen HTPC, and though we didn't encounter the Kodi SiO2 theme on any of these, it is still a good plugin for you to test, research and perhaps use as your favorite. [Read: Kodi Maximinimalism Skin Review: a skin to keep it simple]

This skin plugin Kodi SiO2 has a smooth response to pointing devices like for example a computer mouse. It's easy to guess that a remote such as the Lynec C120 air mouse could do wonders to let you point at icons and handle your HTPC experience. However, a wireless HTPC keyboard will also let you browse the home screen icons easily. In a way these icons remind of the Apple TV interface, similar to the experience provided by the Kodi AppTV Skin. In contrast to that addon, though, SiO2 plugin feels smoother and more visually appealing. Transitions are well-paced and it's easy to change visualizations, though you won't be able to do it with your mouse, having to use the arrow keys instead.

When customizing the Kodi SiO2 skin I found out that you can create shortcuts on your home screen for favorites, addons and even scripts. This is not the case with most skin plugins, where you can only choose among addons or favorites for your shortcuts, and scripts are a dark and difficult to access feature. In this regard, the Kodi SiO2 skin could be the best Kodi Theme for personalization. Since the homescreen is scrollable by default, you might have space on it for lots and lots of icons, though overdoing it would defeat the purpose of making shortcuts (You would have to waste time scrolling).

Visualizations are neat looking and visually appealing, however, they are a bit too simple (with one or two exceptions). You will not find as many visualizations as you would with other skins like the Kodi Metropolis Skin, but the ones you will find are still useful and present interesting information about your media. The Kodi SiO2 skin would not perform well on a limited hardware device, at least if we judge it by transitions and effects. However, if you have a limited hardware device like Raspberry Pi, you could still try using it and see how it performs. [Read: 5 Best XBMC skins for Raspberry Pi]

Below you can see some visualizations available when you use the Kodi SiO2 theme.

Do you recommend the Kodi SiO2 skin?

The playback OSD is confusing to say the least, though I'm sure it becomes intuitive, given enough time of use. No fully functional seeking bar, and the OSD playback menu is hidden away below an arrow on the bottom right of the screen. Despite these shortcomings, the SiO2 plugin for Kodi is still a nice choice to consider if you want to minimize the time and number of clicks between your home screen and your favorite media or addons, while having your HTPC look nice at the same time. Browsing movies from the 10 best Kodi movies addons or TV shows from one of the 10 best live TV addons for Kodi is a visually enticing experience with the Kodi SiO2 skin, and since it's free, I would advise you to try it out today!