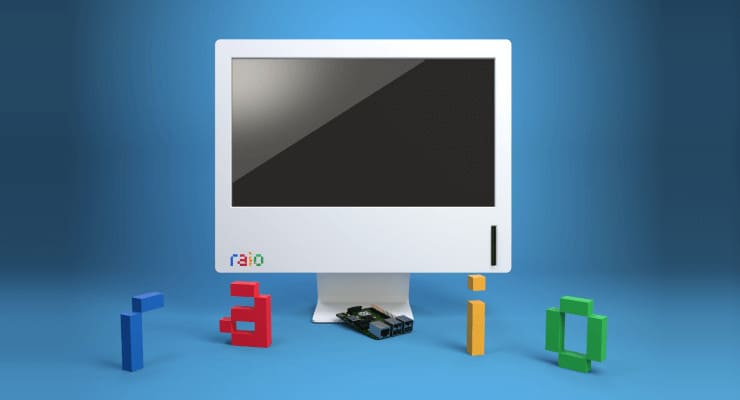 I must admit that when I first read this name, it made me think back to my first language, Spanish. I was reminded of the word “rayo”, which sounds strikingly alike, and means “lightning”. I was once again reminded of that word when I felt a jolt of surprise and amazement as I read the wonderful things you could do with this device, should your hands ever hold one.

I don’t want language lessons: what is RAIO?

Well, as minicomputers start to rise in popularity, we are becoming aware of the many uses they can have. In fact, minicomputers can nowadays be used for almost anything a standard-sized computer can do, including things like setting up your own HTPC. However, these devices often give us the impression of being aimed at techies, or people who can devote time and knowledge to make them shine, and we might see these devices as too complex for us, or too much of a hassle to set up. That’s exactly what the RAIO (which, despite my initial impressions, is an acronym that stands for Raspberry All-In-One) is about. Think about it this way: you take a Raspberry Pi, which isn’t exactly known for its friendly user interface, and then you add a touchscreen, the possibility to expand by adding accessories and even customize the front panel (yes, the guys responsible of this project are offering that option, so if you have a functionality you wished to implement on a Raspberry Pi and never were able to, now would be your chance), and you got yourself a powerful minicomputer with an attractive interface, to help you implement any project you might think of.

Alright that’s interesting, what can I do with Raspberry All in One?

The webpage suggests some uses that could be of interest, actually. They are aiming it at code learning, or gaming, or designing, but these are just suggestions, rather than limitations. If you have been following this website for quite some time, you know that the right minicomputer software will enable you to accomplish many interesting tasks. Now, add to that the fact that you can basically design the front panel for one of these gems, and have it custom-made, and you are then only left with the limits set by your imagination.

How does this RAIO help me set up a Raspberry Pi HTPC?

Are you kidding? When I first saw this device, the words “Home Theater PC” popped up instantly in my mind. See, the thing with this device is that, as I see it, its dimensions are not exactly cumbersome. Okay, it probably has not been designed to be portable, but it really seems like it. In short, you have an almost-portable device that can run HTPC software, with low noise and power consumption, and it also has a touchscreen. If that wasn’t enough to convince you about the clear potential this device has, to let you run your very own Raspberry Pi Home Theater, remember you can also design the front panel if you happen to choose the right version. [Read: Raspberry Pi vs Amazon Fire TV for Kodi media center]

If you are not interested in portability, and you’d much rather hook up your HTPC device to your TV, no one stops you. In fact, what would be really cool about Raspberry All in One, if you decided to use it in a non-portable fashion, is the fact you could actually use its screen as a secondary one. Now I’m not sure about the details on how this would be done, but if you have a device with the ability to connect to the TV and also a touchscreen, that’s pretty much a logical option.

Crowdfunding for RAIO, Raspberry All in One, has started at Indiegogo, where you can check out the details, as well as some videos and even a 3D-model of the device. Be sure to stop by, if you are a minicomputer enthusiast, or if you just don’t seem to find your way around them. Either way, this device is sure to help you, whatever your expertise with these kind of technologies happens to be.