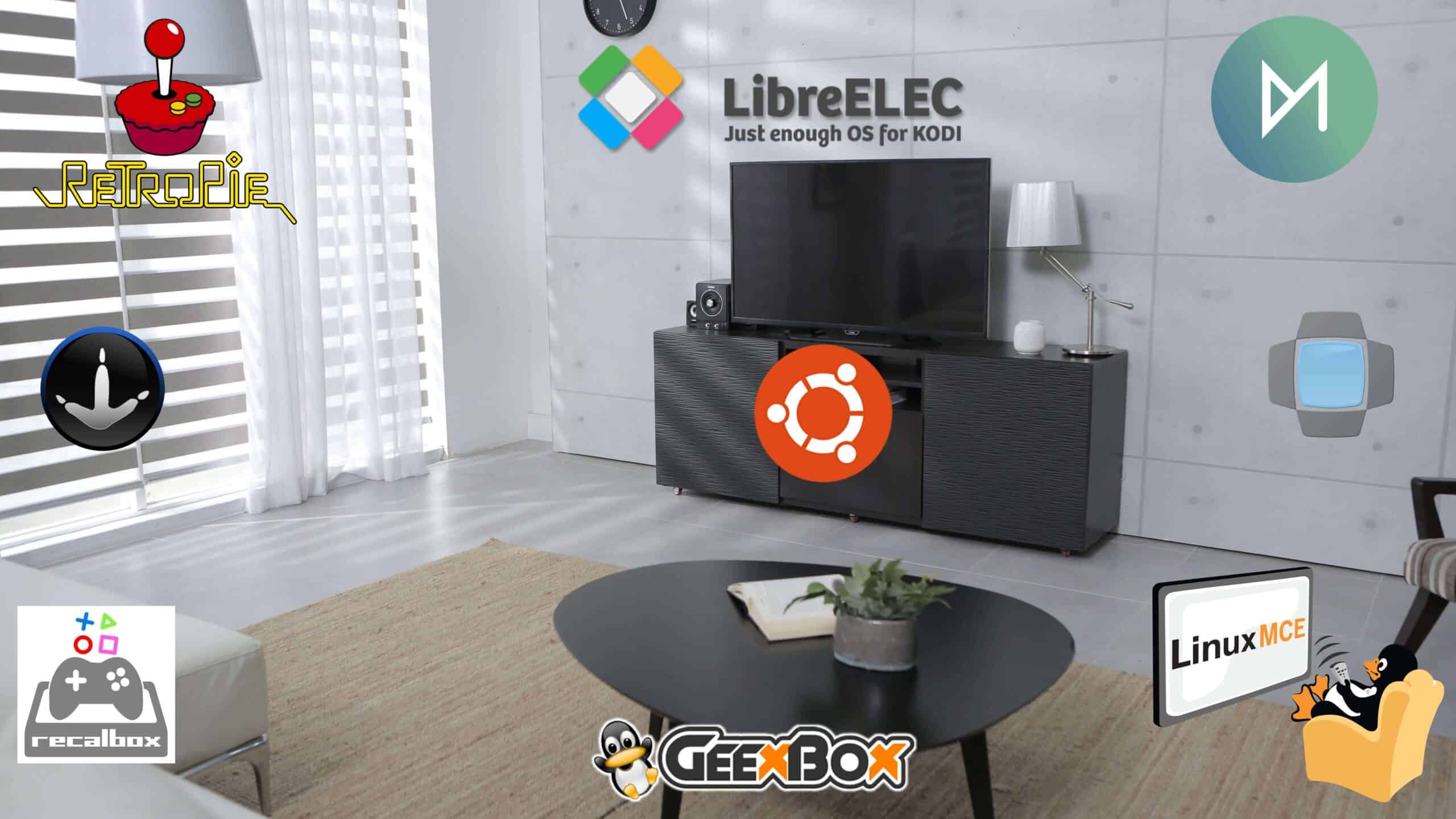 Loads of Linux media center distro choices abound. While certain HTPC OSes concentrate on desktops, still others are suited to single-board computers like the Raspberry Pi or Odroid C2. Check out the top 10 best Linux distro for HTPC options. [Read: 5 Best Linux Laptops You Can Buy in 2017 - Linux Compatible Laptops]

Ubuntu might not be among the ready-made Linux HTPC distros. Nevertheless, it's one of the best choices as a Linux media center distro. That's because of its massive application compatibility and ease of use. Because it's a Debian-based operating system, you can install many HTPC and home server software options including Madsonic, Subsonic for Linux, Docker, and Radarr, a CouchPotato alternative.

Because using Ubuntu as a Linux media center distro is a roll your own project, you benefit from a customized experience. You can install the likes of Kodi, Plex, Emby, Stremio, and even RetroPie on Ubuntu. But unlike dedicated Linux HTPC distros, Ubuntu is not pre-configured out-of-the-box. Nevertheless, Ubuntu does include several standard applications for HTPC use. You'll find VLC and the Transmission torrent client. You can also install Transmission using Docker, as well as install Transmission on Docker using the Kitematic GUI. For its versatility and application compatibility, Ubuntu ranks as an excellent roll-your-own Linux media center distro foundation.[Read: Install Plexpy on Ubuntu - monitor Plex Media Server Usage]

OSMC is a great Linux media center distro. While desktop operating systems and Linux server operating systems aim at traditional laptop, desktop, and server hardware, OSMC is one of the Linux HTPC distros for single-board devices. You can download OSMC for the Raspberry Pi and Apple TV. Additionally, OSMC runs on the Vero, a device created by the OSMC team. [Read: Install OSMC on Raspberry Pi 2 and 1 on a Windows System]

Standing for Open Source Media Center, OSMC is a free, open-source media player. The Debian Linux-based distro offers playback of media via local storage, network attached storage (NAS), as well as Internet-based sources. It's based on the Kodi project. Therefore, OSMC allows access to the full library of Kodi addons. [Read: How to Configure VPN on OSMC with OpenVPN for Raspberry Pi: ]

Because of its low power requirements, OpenELEC makes for an excellent HTPC operating system. You can cobble together an affordable 4K HTPC for OpenELEC use. Since OpenELEC runs Kodi, you have loads of access to a plethora of Kodi addons. Moreover, OpenELEC is fantastic for local file playback and media library organization, as well as NAS streaming. [ReadHow to Install OpenELEC on Raspberry Pi 3 - Kodi Media Center OS]

While most Linux HTPC distros concentrate on movie, TV, and music, Recalbox takes a different approach. The Raspberry Pi Linux media center distro provides retro gaming through the EmulationStation front-end. However, Recalbox also includes Kodi as an app. You can launch Kodi from the EumlationStation front-end, or boot directly into Kodi. [Read: Guide: How to install Recalbox on Raspberry Pi for Kodi with Gaming?]

Since Recalbox includes Kodi as well as EmulationStation, it's a superb all-in-one choice for gaming, video, and music. This comprehensive focus makes it one of the best Linux distro for HTPC options.

Like Recalbox, RetroPie is one of the top Linux HTPC distros available. It's a Raspberry Pi Linux media center distro with a focus on gaming. RetroPie runs EmulationStation as well, and includes Kodi for local file playback, network streaming, and Kodi addons.

Where RetroPie differs from Recalbox is largely installation and customization. Recalbox remains one of the best Linux HTPC distros for beginners. Because its install eschews is as simple as dragging and dropping files, it's simpler than getting started with Retropie. But by the same merit, Recalbox is less customizable. Retropie sports a slew of shaders and options to tailor your experience. Additionally, Retropie boasts better game system compatibility. Support is better with Retropie as well. But regardless, both Recalbox and Retropie are spectacular Linux HTPC distros. [Read: How to build a Raspberry Pi Retro Console?]

LibreELEC is branded a "just enough OS for Kodi." This Kodi-centric media center OS is one of the best Linux HTPC distros. You'll find installers for a smattering of devices including the Raspberry Pi, generic AMD, Intel, and Nvidia HTPCs, WeTek streaming boxes, Amlogic gadgets, and the Odroid C2. [Read: How to install LibreELEC on Raspberry Pi 3 - Kodi Media Center]

It's this massive functionality which posits LibreELEC as one of the top Linux HTPC distros available.

Instead of relegating install to an HDD, you can run GeeXboX from a USB drive or SD card. Its capabilities as a standard OS or a portable HTPC make GeeXboX one of the best Linux distro for HTPC picks. [Read: 4 Great Media center software for Raspberry Pi]

This Gentoo-based Linux media center distro delivers an out-of-the-box experience. Therefore, it's primed for use right after install with a complete application and feature set. Although Sabayon is not marketed as a Linux HTPC distro, the GNOME iteration includes loads of media center apps. You'll find Transmission as a BitTorrent client, Kodi for a media center, the Exaile music player, and Totem for a media player.

Because of its comprehensive array of standard HTPC software, Sabayon stands out as one of the best Linux distro for HTPC use. The all-in-one approach hones a ready-to-go Linux media center experience.

Because of this versatility, LinuxMCE ranks as one of the best Linux HTPC distros for HTPC and home automation use. Since smart homes and automation are on the rise, LinuxMCE lends a one-stop-shop for media and smart home control.

Formerly known as KnoppMyth, LinHES is a Linux media center distro for home theater PCS. Its most recent iteration, R8, is based on Arch Linux. Onboard, you'll find custom scripts for configuration of the MythTV PVR platform.

Like Sabayon, LinHES makes an excellent Linux media center distro. Largely, this derives from its comprehensive feature set. After the quick installation, you're ready for HTPC needs such as DVD playback, gaming, jukebox support, and DVR functionality. Further, LinHES arrives as a complete installation with both a front- and back-end. Alternately, there's a front-end only install option. Due to its ease of use and flexible installation choices, LinHES is one of the top Linux HTPC distros available.

While these are the best Linux distro for HTPC use choices, there are plenty of Linux HTPC distros available. Notably, Mythbuntu and Kodibuntu are solid picks. Yet both Kodibuntu and Mythbuntu are currently unsupported. Therefore, development has lapsed. Nevertheless, these Linux media center distro options still function. However, don't expect future support. Because of lapsed development, it's tough to recommend Kodibuntu or Mythbuntu for long-term use.

Which Linux media center distro options do you suggest?