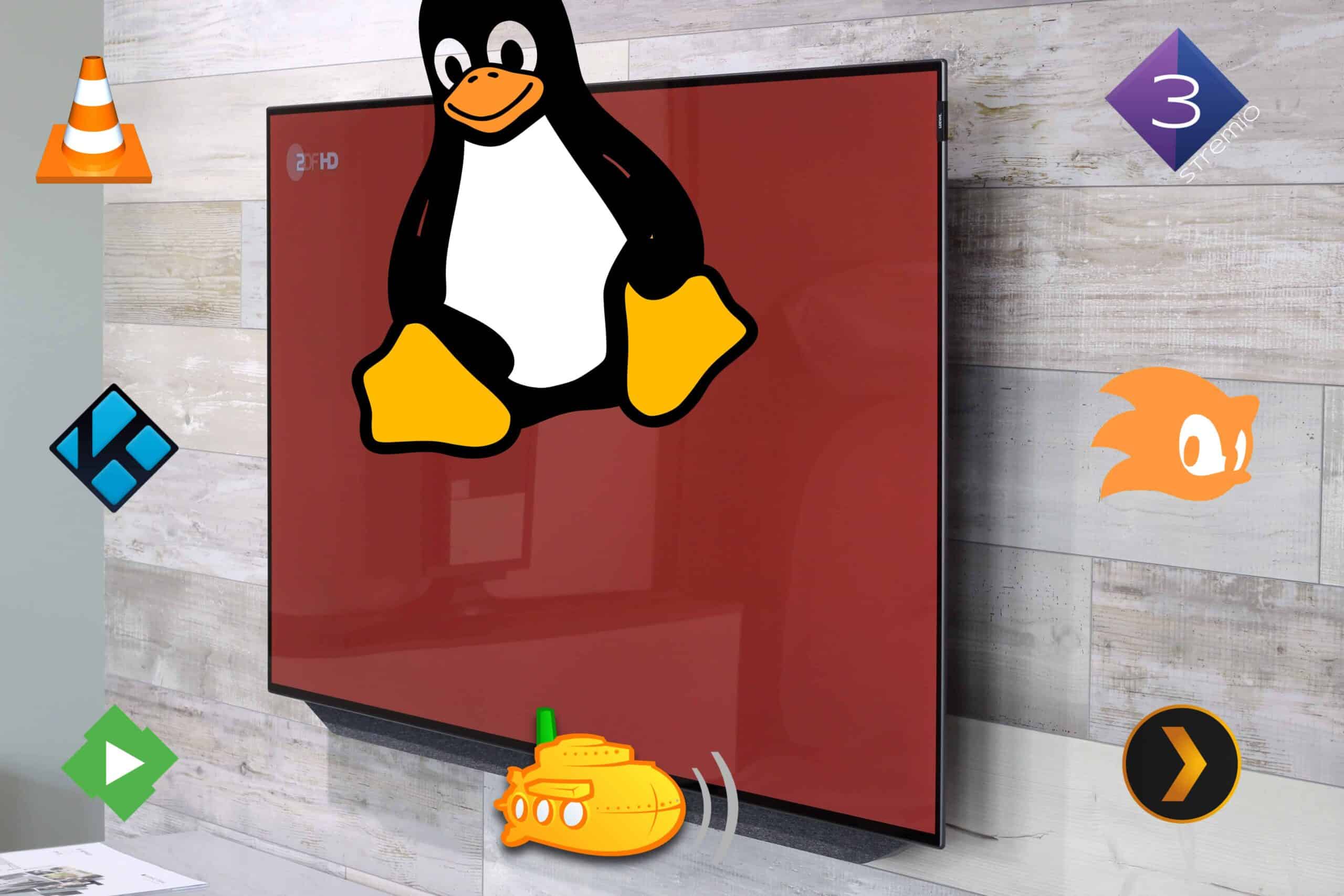 Linux offers a thriving desktop landscape. There are plenty of reasons to opt for a Linux operating system. Linux distributions (distro) are typically free. Because Linux distros are open-source, Linux OSes benefit from dedicated user communities. Often, Linux distros are increasingly lightweight when compared to their Windows and macOS counterparts. Moreover, Linux OSes boast extreme customization, security, and functionality. It's this utilitarian element that posits Linux as an ideal environment for a home theatre PC (HTPC). Plus, there's a wide library of Linux media center software.

Plex is essentially a do-it-yourself Netflix. The massively popular media server software allows you to stream your movies, television shows, and pictures on Plex client devices. As Linux media center software, Plex sports a simple installation process. It's available as Ubuntu HTPC software in the form of a DEB file for Debian-based ditros. Additionally, Plex features an RPM package for CentOS and Fedora. [Read: Guide: How to install Plex on Ubuntu server]

Unlike Windows and macOS, Plex Linux media center software is actually a web-based app. While there is a download as a DEB or RPM package, when you run Plex it opens in a web browser. Still, it's an excellent option for both watching content locally as well as streaming to client devices. That's because Plex organizes your media into a gorgeous library. In addition to its vast server playback options, Plex supports customization options like official and unofficial channels. These lend access to the likes of TED Talks, Plex ranks in the top Linux media center 2017 software on account of its user-friendliness, ease of use, and excellent Linux compatibility.

Like Plex, Emby is a Linux media server software application. But it's a similarly fantastic Linux media center software choice. Where Emby differs from Plex is its customization options. While Plex can be tailored with an array of plugins and options, Emby aims at power users. Plex does include customization aspects such as the Sub-Zero plugin for automatic subtitle downloads. [Read: Plex vs Emby: A Comprehensive Comparison]

Emby remains intuitive to install and use. However, Plex is increasingly beginner-friendly. Where Emby shines is its extreme customization. You'll find loads of skins as well as database management options. These ensure a tailored Ubuntu HTPC software experience when using Emby. Like Plex, Emby is available on a smattering of client devices. Where Plex yields larger client device support, Emby delivers increased control.  [Read: How to install Emby on Ubuntu server the easy way]

Although Plex and Emby are compatible with video and music content, Subsonic specifically focuses on music. Whereas Emby and Plex are video streamers with music capabilities, Subsonic is a media streamer with music as a priority. [Read: Install Subsonic on Ubuntu - Streaming Server Music and Videos]

Subsonic is an excellent music streamer. Due to its flexibility in playlist creation, as well as transcoding engine for on-the-fly lossy and lossless conversion, it's fantastic for audio. But client apps for Subsonic are less polished than those offered by the likes of Plex and Emby. Furthermore, Subsonic video playback is less honed than Plex. But Subsonic is some of the best Linux media center 2017 software available. Notably, it's Ubuntu HTPC software with the ability to play music and video locally via the web app and double as a server.

Madsonic features a comparison chart of Subsonic and Madsonic. You'll notice that the two are fairly comparable. But Madsonic supports a wider variety of organization features than Subsonic. However, like its Subsonic counterpart, Madsonic is better suited to music than video. Nevertheless, Subsonic for its excellent jukebox and media streaming capabilities is a great Linux media center 2017 software option.

Kodi is arguably the king of media center software. Though it lacks server functionality, Kodi is an essential Ubuntu HTPC software installation. As Linux media center software, Kodi plays pretty much any file you throw at it. Additionally, Kodi benefits from a huge user base. Since it's open-source, Kodi gains a ton of development for its platform as well as addons. [Read: 5 Best Legal Kodi Streaming Boxes - Best Kodi Box 2017]

These community-sourced addons are where Kodi dominates. Through its many addons for movies and TV, sports, and broadcast TV streaming, Kodi is fantastic for both streaming as well as local playback. Moreover, Kodi addons for Plex like PleXBMC combine the powerful media center capabilities of Kodi with the server content from Plex. If you're running a hybrid media server-HTPC, you may not need the addons. But if your Linux media center PC is separate from your server, it's a must-have addon. Kodi's combination of addons for streaming and superb local file playback posit it as some of the best Ubuntu HTPC software available.

VLC is one of the first software installs you should perform on any PC. As such, VLC should be included on any Linux media center 2017 build. Luckily, it's on the list of default Ubuntu HTPC software. So you don't even need to perform anything aside from the standard Linux installation. However, if you're using a different distro you might need to install VLC provided it isn't on the list of included Linux media center software. [Read: 10 Best Windows Media Center Alternatives]

Because of its lightweight nature as well as fantastic compatibility, VLC is an excellent choice for media playback. Unlike most other Linux media center software applications on this list, VLC lacks server and library features. Instead, it's a solid, dependable standalone media player. Notably, it's spectacular for DVD and Blu-Ray playback on Linux. But while it's not really intended as streaming software, you can use VLC for in-home video streaming. Due to this uber-versatility, VLC is a mandatory Linux media center 2017 inclusion.

Stremio quickly became a key component of my Linux media center software library. While it does offer a bit of crossover with my other Ubuntu HTPC software like Kodi and Plex, Stremio differs. Whereas many software offerings concentrate on local file playback and streaming, Stremio focuses on helping you find streaming content. An advanced search feature shows where movies and TV are available to stream. It's like the search function on Roku devices. Additionally, Stremio does offer local video playback and a real-time torrent streaming capability like Flixtor or the late Popcorn Time. [Read: Stremio Review and Usage: Different from Kodi and Plex]

Stremio is incredibly easy to install on Linux. There's a DEB file available for installation via the software center. Primarily, I use Stremio to find where to watch shows. Plus, I browse live streaming TV on Stremio. Although its live TV library is fairly large, content is pretty sporadic. Unfortunately, the Linux Stremio platform is lackluster for local video playback. Stremio often has difficulty finding my local media. But since I use Kodi for local playback or Plex for streaming, I don't need Stremio to serve as a library. As a streaming search engine and real-time torrenting platform, Stremio is an Ubuntu HTPC software essential. [Read: How to install Stremio on Linux, Windows, and Mac]

MPlayer is an open-source, free media player. This Linux media center software sports tons of video and audio format compatibility, subtitle capabilities, and physical media playback. While MPlayer is a command line utility, there are several front-ends available that use graphical user interfaces.

But even sans front-end, MPlayer is capable of video display in a window. As Ubuntu HTPC software, MPlayer is more akin to VLC. It packs the library featureset of Kodi, Emby, or Plex, and doesn't carry any server functionality. Still, it's a dependable, lightweight Linux media server software option.

Which Ubuntu HTPC software you pick depends on your needs. If you value local playback, you'll want to use VLC, MPlayer, or Kodi. Whle VLC and MPlayer are competent media center playback choices, Kodi boasts an organized library as well as addons for streaming content.

If you seek a server, Plex, Emby, Madsonic, and Subsonic are your best bets for Linux media center software. However, there's likely no one right answer. I use a combination of Kodi, Plex, Stremio, and VLC on my Linux HTPC. Once you've selected your Ubuntu HTPC software, try the AtoMiC utility to automate your media center needs.

Which Linux media center 2017 apps do you recommend?