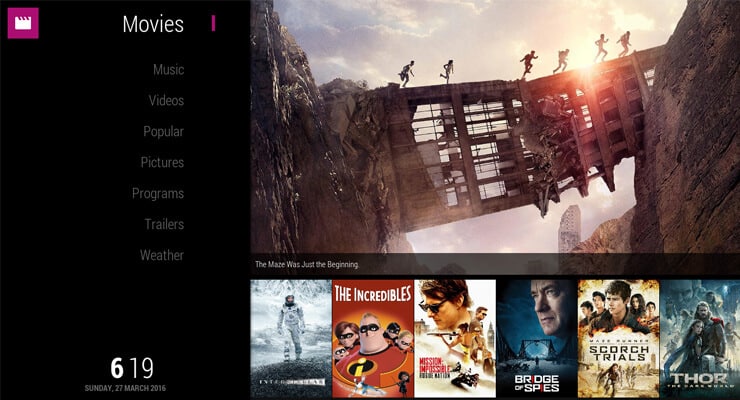 Here's a skin that will suit you whether you want to make your own interface, or just enjoy an attractive Kodi skin plugin. The Kodi KOver skin brings an interface composed of flat-looking card shapes that reminds us of addons such as the Kodi Unity skin. It also offers several color schemes for you to use. The most attractive factor of the KOver skin plugin is the ability it gives users to make their own interface. To allow this, there is an included editor called KOver designer. The KOver designer also allows you to import layouts previously made by other users. If you ever run out of combinations to try with this skin, you could use one of the 6 best Kodi skins we recommended in the past. It is unlikely, however, to run out of options with this customizable Kodi skin addon. [Read: 10 Top Kodi skins for tablets and smartphones]

The lack of mouse support in the KOver skin for Kodi is not really a drawback, if we consider you will not need to download Kodi skins as often with this customizable plugin. There are a bunch of prebuilt sets to use this GUI right away. They actually act and behave like different Kodi skin addons altogether, so it really is like having several plugins in one. If you change the prebuilt preset and the color scheme, you could have an entirely new experience. Use this skin with a wireless HTPC keyboard or a remote app such as Kore or Yatse. This will give you higher precision on your menu browsing, by using the arrow keys. The skin is very responsive and snappy, so it will be a nice experience.

Kodi KOver skin: what about visualizations?

There were 6 different visualizations for movies and TV shows, at least on the Classic KOver preset. The KOver skin plugin actually looks really nice, no matter which visualization you use. Most of them focus on delivering minimal information and looking visually appealing. For most visualizations only a star rating for your media is visible as additional information. The large squares and menus are comfortable enough to be viewed from afar. This skin reminds us of the Kodi Conq Skin or the Kodi BOX skin, because of the prevalence of rectangles and square shapes. This being said, the Kodi KOver skin looks way more elaborate and even complex to render, so I would advice use with caution on limited hardware devices. [Read: 5 Best XBMC skins for Raspberry Pi]

Some visualizations from the Kodi KOver skin can be seen below:

Kodi KOver skin: do you recommend it?

I like the concept of making your own skin and having things placed to your liking; however, most people will agree that sometimes it's also better to just jump in and watch your media, not worrying about configuring anything. It's obvious a lot of work has been put into the Kodi KOver skin, and it's also evident that it truly paid off in this case. With a versatile in-playback menu that lets you control your Kodi video options, and download subtitles for Kodi movies, the Kodi KOver skin is truly a skin that deserves, at least, to be tested.