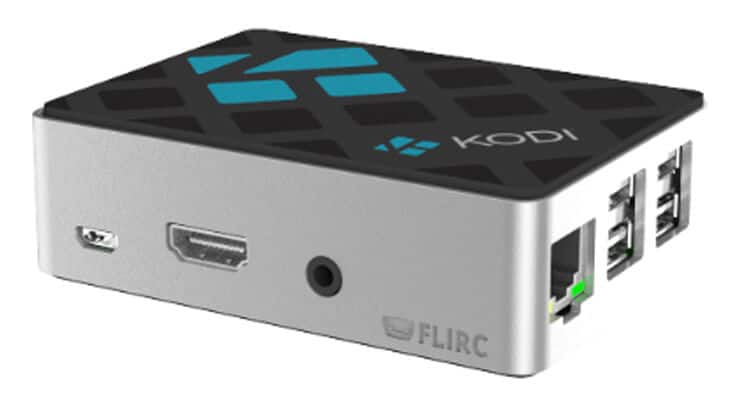 The Raspberry Pi is a very versatile piece of technology. You can convert the Raspberry Pi into a Steam Box. You probably will be able to run Android on your Raspberry Pi very soon as well, enabling you to use a lot of Android apps. Most people who get the Raspberry Pi to use it on an HTPC are eager to run Kodi on it, via implementations such as OpenELEC or OSMC. That is why the Kodi team has gone a step further and is now offering a Raspberry Pi Kodi Case, to match the most common use of the Raspberry Pi. The RPi Kodi themed case looks good as well, and is one of the best Raspberry Pi cases currently available.

This is the first piece of hardware that the Kodi team has set out to offer. They designed the box with the FLIRC company, one that brings to my mind some other products, such as the Flirc USB dongle, that lets you control your HTPC with any remote. The case is designed in with an aluminum core that goes seathed in silver and black, adding to the elegance and good looks of this Kodi case for Pi. The Raspberry Pi Kodi case acts as a passive heat sink, which allows hardware like the Raspberry Pi 3 to be efficiently cooled and avoids negative impact on its performance. [Read: Raspberry Pi 3 Released: More power for low-power HTPCs]

The Kodi Raspberry Pi case is a limited edition product. This means you should get yours soon if you want to give a nice touch to your Raspberry HTPC device. A percentage of the proceeds from the sales of this case will go towards a cancer research institution. In this way, you can contribute with such a noble cause at the same time as you make your HTPC Raspberry box look wonderful and keep your Raspberry Pi protected.